CrewStart™, new software created in house by Sargent-Disc, is designed to help production teams to automate the processing of contracts, start forms, daily rate vouchers and timesheets. Amongst the benefits is that it enables production companies to reduce administration; to sign contracts securely and submit start paperwork;  to calculate timesheets, approve documents and ensure the accuracy of fully auditable reports.

Here’s how CrewStart™worked for Arrow Media.

Keeping the books is essential for any business but when you are as successful as Arrow Media the sheer amount and complexity of paperwork quickly becomes a logistical minefield.

Landmark series like Animal Fight Night for Nat Geo Wild, Investigation Discovery hit See No Evil, global Discovery theatrical film Sherpa,and the RTS and BAFTA winning event Live from Space for NGC Global and Channel 4 are just a handful of the diverse and pioneering documentaries that have propelled Arrow Media to become one of the UK’s most successful independent production companies.

At any one time it will have up to twenty shows in development. Managing payroll and compliance for one production can be taxing enough but juggling multiple projects, each with a different timeline and combinations of hundreds of employees, is an intricate and time consuming business.

It’s vital too – omit one signature or neglect to issue a contract for even the shortest term employee and the legal consequences could be very serious. At the very least a failure to pay on time will disrupt a production’s relationship with its staff.

“Creating, issuing and approving contracts takes time and a backlog builds up quickly when you have 20 to 60 people on a production,” says Iain Pelling, Managing Director of Arrow Media. “Anything that can reduce and simplify the paperwork and keep us running smoothly has to be of benefit.”

As its production slate expanded, the company was faced with a number of compliance issues which began to cause bottlenecks in its accountancy workflow.

These included dealing with tax for people on short-term contracts with varied circumstances. Some might be working on multiple projects at the same time, others working overseas, while an extra might be hired for just one day on location. Having these crew-members properly contracted is a prerequisite for valid cover by insurers.

A related challenge was handling approval mechanisms, a typically time-consuming and inefficient process in which freelancer signatures were at risk of falling between the gaps. Executives were finding too much of their time taken up with chasing the paper trail.

Perhaps one of the most urgent issues was being able to meet HMRC’s enhanced reporting requirements. The latest changes to the Intermediaries legislation (“IR35”) have a significant effect on the Film and Television industries. Production companies are now held to a much higher standard of reporting and compliance over the engagement of team members who use their own Personal Service Companies or freelance arrangements, risking severe financial penalties and HMRC audit.  Arrow needed a clear process and structure to its contracting to allow for proper oversight over all of its agreements, and to allow fast and accurate compliance and reporting to HMRC.

Like many indies however, Arrow Media’s employment procedures had remained largely manual even as the business grew.

To streamline the management process, Pelling turned to Sargent-Disc because of the company’s industry expertise and specialist production payroll services. The initial conversation developed into a partnership as Sargent-Disc worked with Arrow Media to tailor CrewStart™ for Arrow’s needs.

CrewStart™ allows the production office to customise envelopes to send to new production crew, enabling them to gather the information they require and to complete start forms and contracts electronically.

Secure electronic signatures eliminate the need for the physical circulation of documents, saving time and paper. Once the forms have been completed by the crew member, tailored approval chains guarantee that the information is seen and approved by relevant department heads, managers, accountants and producers. The contractual information gathered is held securely and can be reviewed on the go, anytime and anywhere.

The solution can handle anomalies too. Perhaps someone has worked 100 hours a week or another requires a special rider. Arrow Media can simply insert the detail into the contract and send it through the CrewStart™ system.

Using CrewStart™, Arrow Media can see multiple contracts across employments to confirm a a person is following HMRC rules for the Industry, and IR35. It’s just this kind information that assists the preparation of an annual Section 16 report for HMRC.

“CrewStart™ simplifies the business of recruiting people into what needs to be pushed through to payroll and the purchase ledger,” says Andy Cooke, Business Affairs Consultant, Arrow Media. “It’s crucial to achieve this level of clarity so people are paid on time.”

Using CrewStart™ enables Arrow Media to bulk export so all the contracts for a given Delivery Bundle are done and dusted. It’s that simple. As many as three quarters of all Arrow Media’s contracts are to be automated in this way.

All contract details from the straightforward to the atypical are managed with diligence and efficiency. A compliance person can be added to the approval chain enabling them to review the legal paperwork as and when contracts are drawn up rather than having to go through them all at the end of production. It means production executives are not burdened with having to double check each and every hire. They can quickly sign off on the bundle, reducing overheads and duplicated effort considerably all within the CrewStart™ mechanism.

“The biggest benefit of CrewStart™ is simpler contracting and the reassurance that risk is under control,” says Pelling. “It reduces error and manual processes. It’s about getting our crew and our staff on board, and knowing that the deal is done.”

“It has been a great experience working with Arrow Media to configure the functionality of CrewStart™.  Helping them resolve their contracting and on-boarding challenges, and the management of risk through the application has been very rewarding for the team as a whole” says Laurence Sargent, Director, Sargent-Disc. He continues “CrewStart™ is one of the products within our Digital Production Office® initiative. This suite of products is designed to improve workflows, increase efficiency, reduce the use of paper and the carbon footprint on production – all within a secure ISP/IEC 27001:2013 certified environment.

As CrewStart™ is deployed more widely, we look forward to developing additional features and functionality to the application, to meet our clients’ needs.” 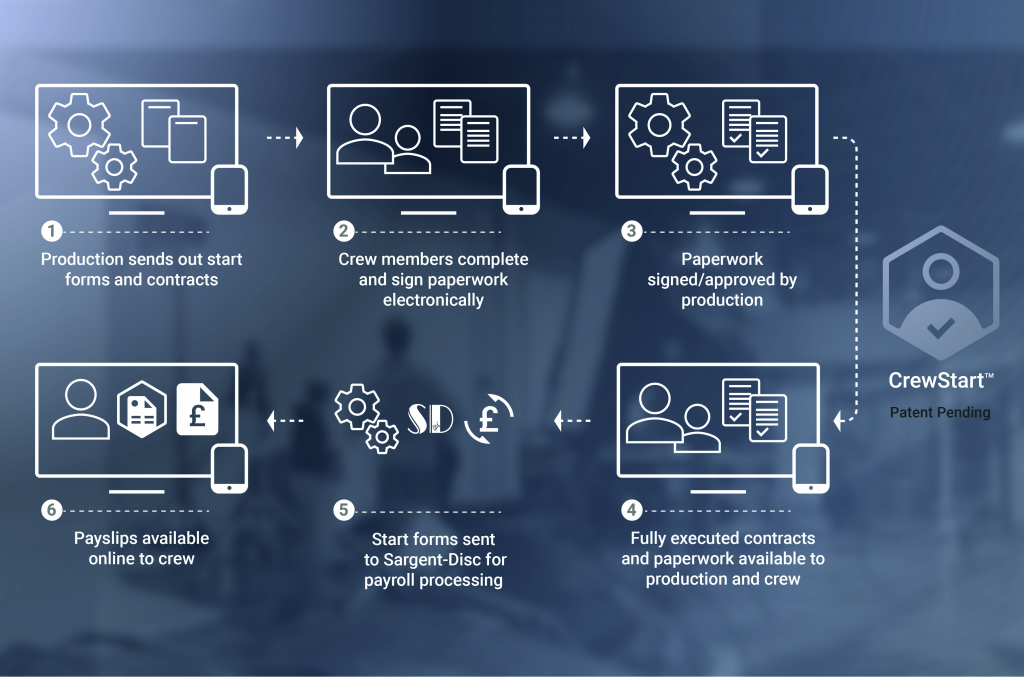 Andy Cooke has advised and represented media companies for more than 20 years, both as a lawyer and consultant. He has worked with every major film & tv company in the US and Europe, advising on compliance, regulation and business process. He is the Project Director at Rinseandspin Limited – rinseandspin@gmail.com

Taking the drama out of production.
© Sargent-Disc 2016. All rights reserved.
Contact Us

Send us an email and we'll get back to you as soon as possible.